Association of Family History With Cancer Recurrence, Survival, and the Incidence of Colorectal Adenoma in Patients With Colorectal Cancer

Approximately 5% to 10% of colorectal cancer (CRC) patients have at least one affected first-degree relative (FDR) with CRC [1,2]. Having a family history (FH) of CRC in a FDR is a known risk factor for the development of CRC, with twofold increased lifetime risk of CRC [3–5]. This risk increases with a greater number or younger age at diagnosis of the affected FDRs [6–8]. Based on this, current screening recommendations for CRC adopted the number and age at diagnosis above or below 60 years of affected FDR with CRC or an advanced adenoma as risk stratifiers [9].

However, the influence of FH of CRC on CRC recurrence and survival remains uncertain, and the results from studies are inconsistent. Several studies reported the negligible impact of FH of CRC and survival [10–12]. Some studies reported improved survival [13–16], whereas the others showed worse prognosis in patients with a FH of CRC [17,18]. This inconsistency may be attributed to different study designs, heterogeneity in baseline CRC characteristics and study population, or different definition of FH. The definition of FH among patients with CRC can vary, from including only FDR with CRC to encompassing second- or third-degree relatives with CRC or adenomas. These various definitions of FH were not applied or compared in previous studies evaluating outcome in CRC patients with FH, and it is unknown which definition has the largest association with the prognosis.

The aim of our study was to evaluate the association of FH of CRC with cancer recurrence, survival, and the incidence of colorectal adenomas in patients with stage III CRC through the use of a various definitions of FH and more homogenous Asian patients.

The study protocol was in accordance with the ethics guidelines of the 1975 Declaration of Helsinki and the study procedure was approved by the Institutional Review Board of Severance Hospital.

All patients received a baseline colonoscopy before curative surgery or within 6 months after the surgery (in cases of obstructing CRCs). We excised all adenomas detected during baseline colonoscopy. The incidence of colorectal adenoma and advanced adenoma in each surveillance colonoscopy and during total follow-up period was evaluated. An advanced adenoma was defined as an adenoma 10 mm or greater in diameter, an adenoma with villous component, or with high-grade dysplasia or carcinoma.

Baseline patient characteristics were analyzed with descriptive statistics. Comparisons of demographic, clinical, and pathologic variables according to the FH were done using Student’s t-test for continuous variables and Pearson’s χ2 test for categorical variables. The survival analysis was done using Kaplan–Meier curves and the log-rank test. Cox proportional hazards regression was used to determine the simultaneous impact of FH and potential confounders on OS and DFS. Tests of interactions between FH and potentially modifying covariates were assessed by entering the cross product of FH and the covariate of interest. A logistic regression analysis was used to evaluate the colorectal adenoma incidence rate with adjustment for various confounders.

We also assessed the association between FH and OS or DFS according to the strata of other potential predictors of outcome (Fig. 4). Because FH definition of ‘colorectal neoplasm in FDR’ was consistently significant predictor for both OS and DFS, we used this definition of FH in stratified analysis. The effect of FH on the risk of cancer recurrence or death was not significantly modified by gender or performance status. In contrast, the effect of FH was different according to patient age, depth of invasion, number of positive lymph nodes, tumor location, differentiation, and MSI status. The protective effect of FH of colorectal neoplasm on cancer recurrence or mortality was prominent among patients older than 50 years, T3 or T4 disease, positive lymph node of less than 4, tumor location at left colon (splenic flexure to the rectosigmoid junction) and rectum, well to moderate differentiation, and microsatellite stable (MSS) tumor. However, a test of interaction between these factors and the presence of FH revealed that the effect of FH on OS and DFS did not appear to be modified by these factors (all for interaction > 0.05) (Fig. 4).

In the present study, a FH of colorectal neoplasm in FDR was associated with a significant reduction in cancer recurrence and mortality in a cohort of patients with stage III CRC treated with surgery. This improvement in OS and DFS was consistent among different definitions of FH, but the adjusted HR for cancer recurrence or death was significant only when the definition of FH was ‘colorectal neoplasm in FDR’. The incidence of adenoma and advanced adenoma during surveillance colonoscopy was not different according to the FH.

The definition of FH among patients with CRC can vary, and most studies define the FH as ‘FH of CRC in FDR’ with or without including second-degree relatives. Whether the FH of colorectal neoplasm including polyps in FDR affects the prognosis of patients with CRC is unknown. In this study, FH of not only CRC but also polyps in FDR had association with prognosis in patients with CRC. Although this finding needs to be confirmed by further studies, more detailed history taking including FH of colorectal polyps may be helpful in prognostication of CRC patients.

We observed an increase in surveillance colonoscopy among those with a FH. Nevertheless, the incidence of adenoma and advanced adenoma was not increased in the patients with CRC having FH of colorectal neoplasm. It is unknown whether a FH of CRC would impact the natural history of adenoma, especially in patients with previous CRC, but the need for more frequent surveillance colonoscopy in patients with previous CRC and FH has been a concern of many clinicians. In the clinical practice, a FH of CRC is often the cause of shorter colonoscopy surveillance interval, although the rationale is insufficient [19]. Although more results from prospective studies are needed, it is unlikely that more frequent colonoscopy will be helpful in CRC patients with FH of colorectal neoplasm, based on the results of our study.

The effect of FH on improved prognosis of CRC is sometimes explained by earlier detection of CRC. However, our study only included the patients with same stage, and the baseline patient, disease, and therapeutic factors associated with CRC prognosis such as performance status, depth of invasion, the number of positive lymph nodes, differentiation, preoperative carcino-embryonic antigen, and adjuvant chemotherapy were not different between patients with and without FH. Also, the effect of FH persisted after adjusting for these factors. The protective effect of FH of colorectal neoplasm on cancer recurrence or mortality in this study was modified by age, depth of invasion, number of positive lymph nodes, tumor location, differentiation, and MSI status. Although tests for interaction were not significant, these factors have a potential to be a mechanism by which FH affects outcome.

Up to 30% of CRCs exhibit increased familial risk, but only approximately 5% of CRCs are associated with highly penetrant, well-defined inherited mutations and clinical presentation, and the etiologies of the remaining 20% to 30% of inherited CRCs are not completely understood. Relatively common but less penetrant genetic predisposition may influence survival as well as increased CRC risk in familial CRC patients. Some previous studies suggested that FH of CRC is associated with higher frequency of MSI-high [21], and the beneficial effect of FH on CRC survival was prominent in right colon [12,15,16]. However, the association of MSI status on prognosis was not consistent between studies [14], and MSI status was not different by FH in our study. Rather, in this study, stratified analysis showed that the improved OS and DFS was more prominent among patients with left-sided colon and rectal cancer and MSS cancer. Although left side predominance was one of the unique characteristics of Asian HNPCC patients [22], our result suggests that the possible association between a FH and improved prognosis may be attributed to unrevealed genetic predisposition rather than MSI or MMR status. The linkage analysis and population-based genome-wide association studies have identified a number of potential loci associated with familial CRC, such as 9q22, 8q23, 8q24, 9p24, 11q23, and 18q21 [23,24]. The association of these genetic predisposition and CRC outcome needs to be studied further. However, the relationship between FH and prognosis of CRC is likely to be complex and may be influenced by an interaction between genetic predispositions and shared environmental factors. Also, it is possible that the mechanism of the influence of FH on CRC prognosis is different among Asian and Western populations. Further studies are warranted to identify the influence of FH on prognosis of CRC and underlying mechanism of increased familial risk and possible improved survival of CRC.

Our study has several strengths. First, because we included patients with stage III CRC, the impact of heterogeneity by disease stage can be reduced. Second, long-term follow-up for the survival was available using central data from National Cancer Registry. Third, multiple confounding factors of mortality or adenoma incidence such as smoking, alcohol, BMI, use of aspirin were evaluated and adjusted. Fourth, because the majority of the patients examined the MSI status, the association between MSI status and prognosis could be evaluated.

There were several limitations of this study. First, we collected self-reported FH on medical records retrospectively, and FH status may be misclassified or underestimated. Indeed, the sample size of CRC patients with FH of colorectal neoplasm in this study was 8.9%, less than some other studies. However, the Asian studies reported relatively small proportion of FH compared with Western studies [25,26], and this may be related to the lower incidence of CRC in Asia during previous several decades. Also, self-reported data have been shown to be reliable in the previous studies [27]. To minimize the bias from the self-reported system, we collected multiple medical records containing FH status in the same subject such as admission note, intern note, nurse chart, and colonoscopy results. Second, though we analyzed MSI status, we were unable to evaluate for the other detailed genetic information. Because techniques for genetic analysis including next generation sequencing are developed, it is expected that these tests will be used to link the genes and prognosis related to FH in the near future. Third, this study was a single center, retrospective study, which might lead to bias especially for the surveillance colonoscopy which showed variable number and interval among individuals.

In conclusion, a FH of colorectal neoplasm including CRC and polyps in FDR was associated with a significant reduction in cancer recurrence and mortality in a cohort of patients with stage III CRC treated with surgery. The incidence of adenoma and advanced adenoma on surveillance colonoscopy was not different according to the FH of colorectal neoplasm in patients with CRC. The protective effect of FH of colorectal neoplasm on cancer recurrence or mortality was modified by age, depth of invasion, number of positive lymph nodes, tumor location, differentiation, and MSI status. The association between a FH and improved prognosis may be attributed to unrevealed genetic predisposition which might have association with these modifying factors. Further studies are warranted to identify the underlying mechanism of increased familial risk and possible association with improved outcome of CRC across different populations.

This study was supported by a grant from the National R&D Program for Cancer Control, Ministry of Health and Welfare, Republic of Korea (1631020). 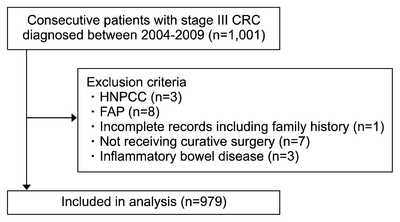 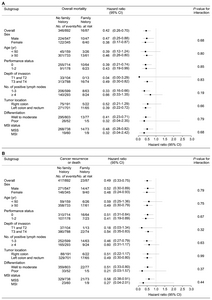 Fig. 4. Stratified analysis of overall survival (A) and disease-free survival (B) according to the 1st-degree family history of colorectal neoplasm. MSI, microsatellite instability; MSS, microsatellite stable.