Worldwide, the incidence of thyroid cancer has been on the rise. According to GLOBOCAN 2018, thyroid cancer accounted for 3.1% (567,233) of the total cancer incidence and was ranked ninth among the most common types of cancer [1]. However, the mortality associated with thyroid cancer remains unchanged [1]. In South Korea, which has seen the largest increment in prevalence despite an overall rapid decrease since 2011, thyroid cancer was the third most common cancer accounting for 11.3% (26,051) of all cancers in 2016 [2]. Over-diagnosis related to new diagnostic techniques and increased medical surveillance are considered to play a major role in this increment and even as a voluntary thyroid cancer screening within national cancer screening programs [3].

The majority of the patients diagnosed with thyroid cancer undergo total thyroidectomy, followed by lifelong thyroid replacement therapy. It was reported that people who underwent total thyroidectomy experienced more problems with health-related quality of life [4]. Of late, less invasive options are being preferred for the treatment of small papillary thyroid cancer, and the wait-and-watch approach is becoming increasingly common for patients with low-risk papillary thyroid cancer [5]. Given the relatively young age of patients at diagnosis and a survival rate that is even better than in the general population [2], in the long term, comorbidities play a major role in the lives of survivors of thyroid cancer. Studies have identified various long-term complications in thyroid cancer survivors, including cardiovascular disease [6], and aging-related problems [7]. These comorbidities are highly attributed to lifestyle factors, emphasizing the value of positive health behaviors. In general, for cancer survivors, health behaviors are becoming increasingly important to prevent recurrence of secondary cancer, comorbidities, and decline in quality of life [8,9]. However, morbidity and health behavior-related studies in thyroid cancer survivors have been rare, possibly because of the better survival rate as compared to other forms of cancer.

In this study, we analyzed baseline data from the Health Examinees (HEXA) study [10], a part of the Korean Genome and Epidemiology Study (KoGES) undertaken by the National Institutes of Health and Centers for Disease Control and Prevention. The KoGES is a large-scale prospective cohort study to investigate the relationship between genetic and environmental factors and chronic diseases. Questionnaires are used to collect information on sociodemographic characteristics, physical activity, drinking and smoking habits, disease treatment status, medical and family history, drug usage, and biospecimens, as well as laboratory measurement data [11]. A total of 173,357 individuals aged 40 to 79 participated in the HEXA from 2004 to 2013. Details of the HEXA design can be referred to elsewhere [10].

In this study, thyroid cancer survivors were defined as those who self-reported a clinical diagnosis on the questionnaire. Age at thyroid cancer diagnosis and current treatment status were the additional details collected. There were 942 (75 males and 867 females) subjects who had ever been diagnosed with thyroid cancer. “Cancer survivors” have been defined in varying ways by different researchers [12] and this study applied the broad definition proposed by the National Coalition for Cancer Survivorship [13] to include all individuals who had ever been diagnosed with thyroid cancer. The non-cancer controls, numbering 155,317, were those who reported that they never been diagnosed with any type of cancer. The thyroid cancer survivors and non-cancer controls were matched by age (five-year age groups), sex, educational attainment (under high school or above college), and household income (less than $2,700/mo or over $2,700/mo considering the median value of household income) at a ratio of 1 : 10. Finally, the number of matched subjects included 942 survivors and 9,420 non-cancer controls in the analysis.

The outcome variables were current health behaviors, including smoking, drinking, and physical inactivity, at the time of the survey. Current smoking was defined as having smoked more than 100 cigarettes over the lifetime and being a smoker at the time of the survey. If subjects did not meet these criteria, they were classified as non-current smokers. Current drinking was defined on the basis of consuming alcohol once or more per month during the last one year. If subjects did not meet this criterion, they were classified as non-current drinkers. According to previous guideline [14], physical inactivity was defined as < 150 minutes of regular sweaty exercise per week.

Other variables included as covariates were age, sex, marital status (married/cohabitating, divorced/widowed/unmarried), educational attainment (under high school, above college), household income (less than $2,700/mo, over $2,700/mo), employment status (unemployed, employed), self-rated health status (healthy, normal, or unhealthy), family history of cancer, and years since diagnosis (1-5, 6-10, or ≥ 11 years). Comorbid chronic diseases were classified as “yes” if any of the following disease were met based on the past medical diagnosis in survey: hypertension, diabetes, dyslipidemia, stroke, transient ischemic attacks, angina or myocardial infarction, colon polyp, fatty liver, chronic liver disease or liver cirrhosis, gallbladder stone or cholecystitis, thyroid disease, arthritis, and osteoporosis. Body mass index (BMI, kg/m2) was classified as < 25 kg/m2 and ≥ 25 kg/m2 according to the WHO criteria for the Asian population [15]. 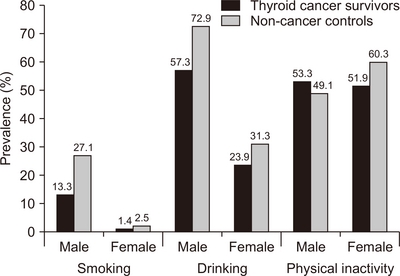 Another finding of this study concerns the clustering of health behaviors. Current smoking was correlated with higher alcohol consumption and physical inactivity. This kind of clustering has been observed in previous study on cancer survivors [16] as well as the general population [23]. One notable finding in the present study was that there was a negative correlation between physical inactivity and current alcohol consumption; in other words, those who were physically active were more likely to be current drinkers. This finding was not consistent with previous studies [16,23]. In South Korea, drinking is considered a way of maintaining a sense of community and is a part of work and leisure gatherings [24]. It is considered that there is a significant correlation between social networks and exercise behavior [25]. Thus, physically active survivors might have had more opportunities to develop social relationships and consume alcohol.

Despite these limitations, as per the authors’ knowledge, this is the first study to investigate health behaviors and their associated factors in a relatively large sample of thyroid cancer survivors. In addition, thyroid cancer survivors were matched by sex, age, educational level, and income to non-cancer controls to increase comparability between the two groups.

The research was supported by the grant funded in 2019 by the Korean Foundation for Cancer Research, Seoul, Republic of Korea.