This is an Open Access article distributed under the terms of the Creative Commons Attribution Non-Commercial License, which permits unrestricted noncommercial use, distribution, and reproduction in any medium, provided the original work is properly cited.

Benign prostatic hyperplasia (BPH) is a common disease among old-aged men [1]. Epidemiological studies have demonstrated that various etiological factors are responsible for increasing the risk of the development and the progression of BPH [2]. BPH occurs when both stromal and epithelial cells of the prostate in the transitional zone proliferate by cellular processes that are thought to be influenced by sex hormones and inflammation, resulting in the lower urinary tract syndromes (LUTS) [3]. Treatment options for men with BPH include the oral administration of 5α-reductase inhibitors and α1-adrenergic receptor antagonists [4]. Finasteride and durasteride are clinically available 5α-reductase inhibitors, which attenuate the development of BPH by suppressing the conversion of testosterone into dihydrotestosterone [5]. On the other hand, doxazocin and tamsulosin are widely used α1-adrenergic receptor antagonists, which relieve the LUTS by relaxing the neck of the bladder and smooth muscles in the prostate [6]. However, the use of these medications is restricted due to the adverse effects, such as erectile dysfunction, loss of libido, dizziness, and upper respiratory infection [7].

Plants have been the most utilized natural sources of pharmacologically active products due to the abundance and the accessibility [8]. Therefore, exploring plant ingredients or plant extracts has been proposed as a strategy to inhibit or delay many age-related diseases [9]. plants originating from eastern Asia are adapted to the ecological zones particularly in the temperate areas of Korea, Japan and China; they are widely used for both ornamental decoration and medical purposes. Major species of include , . , and [10], and the analysis of phytochemicals existing in the plants demonstrated the presence of diverse types of flavonoids, lignins, aroma-active compounds [11-13]. While (also known as Chinese quince) is known to exhibit various beneficial pharmacological effects [14], it is still unclear whether could exert suppressive effects on the development of BPH. The present study was undertaken to address this issue.

DPPH and ABTS assays were conducted as previously described [15,16].

Establishment of human keratinocyte HaCaT-ARE-GFP-luciferase cells were previously described [17]. In brief, HaCaT-ARE-luciferase cells were seeded in six-well plates, cultured until 70% confluence, and exposed to ethanol extract of . After treatment, cells were lysed with a luciferase lysis buffer (0.1 M potassium phosphate buffer at pH 7.8, 1% Triton X-100, 1 mM DTT, 2 mM EDTA) and the resulting luciferase activity was measured by the GLOMAX Multi-system (Promega, Madison, WI, USA). The data is depicted as a fold ratio of the firefly luciferase activity compared with the control after normalization with the protein concentration.

HaCaT cells were plated in 96-well culture plates. After exposure of ethanol extract of , the media was removed and HaCaT cells were mixed with 200 μL MTT stock solution (2 mg/mL) for 1 hour. HaCaT cells were washed with 1x PBS and lysed with 100 μL DMSO, followed by spectrophotometer measurement at the wavelength of 570 nm. The percentage of viable cells was plotted in comparison with the control group.

After acquisition, samples were incubated with 200 μL RIPA buffer (50 mM Tris-HCl at pH 8.0, 150 mM NaCl, 1% NP-40, 0.5% sodium deoxycholate, and protease inhibitors cocktail) for 1 hour on ice. Lysates were collected by centrifugation, and protein concentrations were measured by use of the BCA protein assay kit (Thermo Fisher, Pittsburgh, PA, USA). Equal amounts of lysates were resolved by SDS-PAGE and transferred to PVDF membrane. The membrane was incubated in blocking buffer (5% skim milk in 1x PBS-0.1% Tween-20, PBST) for 1 hour and hybridized with appropriate primary antibodies in 1x PBS containing 3% bovine serum albumin (BSA) overnight at 4°C. After washing three times with 1x PBST for 30 minutes, the membrane was hybridized with appropriate HRP-conjugated secondary antibody (Cell Signaling Technology, Danvers, MA, USA) for 1 hour at room temperature and washed three times with 1x PBST solution for 30 minutes. The membrane was visualized using an enhanced chemiluminescence (ECL) detection system. The image of β-actin was used as a control for equal loading of samples.

Induction of BPH by testosterone propionate in mice

The animal experiment was carried under the Institutional Animal Care and Use Committee-approved Protocol (IACUC-2019-002-1) of Dongguk University (Seoul, Korea). Six-week-old Balb/c mice were purchased from Daehan Biolink (Eumseong, Korea), housed in the sterile filter-capped microisolator cages, and provided with water and diet ad libitum. Mice were separated and intraperitoneally injected with testosterone alone for 35 days to induce BPH or together with intraperitoneal injection of finasteride (positive control) or with oral administration of ethanol extract of to evaluate the pharmacological activities.

At sacrifice, mouse prostate tissues were excised and fixed in 10% formalin solution overnight. Tissue dehydration was performed by serially immersing the tissues into 75%, 80%, 85%, 90%, 95%, 100% ethanol, and xylene solution for 1 hour at each step. Dehydrated tissues were embedded in the paraffin block. Paraffin-embedded tissues were sectioned at 5 μm, mounted on the slide, and deparaffinized. Tissues were stained with Mayer’s hematoxylin solution for 5 minutes at room temperature and rinsed in tap water until the water becomes clear. In the bluing step, the tissues were stained with repeated cycles of eosin Y ethanol solution for 70 seconds, 5 dips in 95% ethanol, and 5 dips in 100% ethanol at room temperature. The tissues were rinsed with distilled water and the images were taken on the microscope (Olympus, Tokyo, Japan).

Tissues on the slide were incubated with 1% BSA blocking solution for 30 minutes. After washing three times with 1x PBS, the tissues were hybridized with primary antibodies overnight at 4°C. The slides were washed with 1x PBS three times and incubated with anti-rabbit and anti-mouse UltraTEk HRP antibodies (ScyTek Inc., Logan, UT, USA). Development of the slides was performed with 3’,3′-diaminobenzidine (DAB) (GBI Labs, Bothell, WA, USA). The slides were then sealed with mounting medium and the images were taken on the microscope (Olympus).

Aberrant production of reactive oxygen species (ROS) is responsible for the generation of oxidative stress [18]. Oxidative stress can be relieved by treatment with antioxidants or by the induction of cellular phase II cytoprotective enzymes [19], the latter of which is under the control of transcription factor, NRF2 [20]. In a normal condition, NRF2 is constantly poly-ubiquitinated by Kelch-like ECH-associated protein 1 (KEAP1), an adaptor of Cullin 3 E3 ubiquitin ligase complex. Upon exposure to oxidants or electrophiles, NRF2 translocates into the nucleus and activates the ARE, a cis-acting DNA element located in the promoter of NRF2 target genes [21]. We first examined whether ethanol extract of possesses free radical scavenging effects in vitro. DPPH and ABTS are synthetic compounds that can generate colored radical and redox-active compounds, and the ability of a text sample of interest to reduce the colored compound is monitored by spectrophotometer [22]. Our results show that ethanol extract of exhibited significant DPPH (Fig. 1A) and ABTS (Fig. 1B) free radical scavenging effects in vitro. 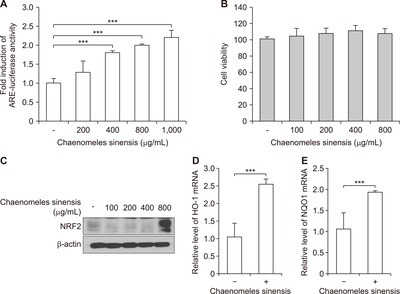 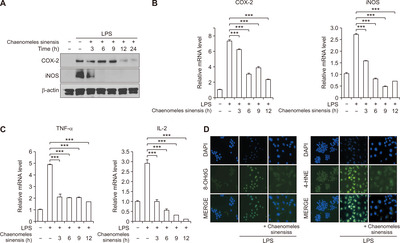 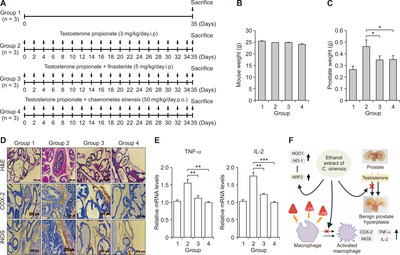 is rarely taken as a raw fruit since it is astringent and hard due to a high amount of lignin [24]. However, extract has been utilized in tranditional medicine, and a number of preclinical studies have been recently performed to evaluate the in-depth pharmacological effects of extract. For example, Kim and colleagues showed that WS-5, a 45% ethanol extract of a mixture of three traditional plants with L. (turmeric), the fruits of , and the dried rhizome of Roscoe (ginger) improved β-amyloid-induced memory impairment by inhibiting acetylcholine esterase (AChE) [25].

Lee and colleagues [26] have characterized phytochemicals existing in the twig of by nuclear magnetic resonance (NMR) and demonstrated that selected compounds exhibited significant anti-carcinogenic, neuroprotective, and anti-inflammatory effects [26]. Zhang and colleagues have demonstrated that the ethyl acetate fraction of the extract exhibited anti-hyperuricemic and nephroprotective effects [27]. However, we are unware of whether ethanol extract of used in our study possesses analogous pharmacological effects since chemical composition in extract will vary depending on the cultivation and extraction condition.

In the present study, we have demonstrated that ethanol extract of induced NRF2-dependent gene expression in HaCaT cells, inhibited LPS-induced pro-inflammatory enzymes and cytokines in RAW264.7 cells, and suppressed the development of BPH induced by testosterone propionate in vivo (Fig. 4F). Considering the implication of oxidative stress and inflammation in pathogenesis, it is possible to speculate that extract could be applicable to treatment of other chronic diseases. Further studies will be needed to examine whether ethanol extract of could decrease the level of dihydrotestosterone in the blood and/or interferes with the androgen receptor signaling pathway in the prostate since dihydrotestosterone, a metabolite of testosterone formed by 5α-reductase, promotes BPH by activating the androgen receptor signaling pathways [28].

This work was supported by the grant of the Sunchang Research Institute of Health and Longevity.