Lysine-specific histone demethylase 1 (LSD1), also known as KDM1A, can remove the methyl group from lysine 4 and 9 at histone H3, which regulates transcriptional suppression and activation. Recently, high expression of LSD1 in tumors has been shown to be involved in cancer cell proliferation, metastasis, and poor prognosis. We found that SP2509, a potent and reversible inhibitor of LSD1, induced apoptosis in human renal carcinoma (Caki and ACHN) and glioma (U87MG) cells. Pharmacological inhibition and siRNA-mediated silencing of LSD1 expression effectively downregulated anti-apoptotic proteins such as Bcl-2 and Mcl-1. Ectopic expression of these proteins markedly attenuated SP2509-induced apoptosis. At a mechanistic level, we found that inhibition of LSD1 downregulated Bcl-2 at a transcriptional level. Interestingly, protein expression of Mcl-1 was modulated at a post-translation level. Our results reveal that LSD1 could induce apoptotic cell death in renal carcinoma cells through downregulation of Bcl-2 and Mcl-1.

Histone methylation has been known as a key event for transcriptional regulation of genes, and many researchers have considered that histone methylation is an irreversible epigenetic marker [1]. However, Shi et al. [2] have reported that histone methylation is a reversible process through the discovery of the nuclear amine oxidase homolog LSD1 with histone demethylating activity. Histone demethylases are classified into 2 classes depending on the catalytic mechanisms; the flavin adenine dinucleotide-dependent amine oxidases (LSD1 and LSD2) and Jumonji domain containing proteins [3,4]. Specially, LSD1 binds to the promoter regions, demethylases lysine 4 and 9 at histone H3 (H3K4me1/2 and H3K9me1/2), and acts as a repressor or an activator of transcription. Demethylation of H3K4me1/2 or H3K9me1/2 by LSD1 induces gene transcription suppression or activation via inhibition of mono- and dimethyl group(s), respectively [5,6].

Pathologically, expression of LSD1 is elevated in many cancer cells including neuroblastoma [7], leukemia [8], lung [9], colon [10], and breast cancer [11], which is associated with cancer cell proliferation, metastasis and poor prognosis [12,13]. Therefore, dysregulation of LSD1 can potentiate cancer treatment through inhibition of cancer cell proliferation and metastasis. Kumar et al. [14] have reported that LSD1/2 is highly expressed in renal cell carcinoma with clinical correlation as prognostic markers. Recently, multiple reversible LSD1 inhibitors have been developed. Among them, SP2509 is a non-competitive and potent inhibitor of LSD1 with anti-proliferative and anti-cancerous activities [15]. SP2509 inhibits proliferation through induction of ER stress response, as well as induces apoptosis in Ewing sarcoma cells [16,17]. Co-treatment with SP2509 and panobinostat (pan-HDAC inhibitor) was synergistically cytotoxic against acute myeloid leukemia [16]. Although the anti-cancer effects of SP2509 have been reported in several cancer cells, its molecular mechanism is still not clear.

In this study, we have found that SP2509 induces apoptosis by downregulation of Bcl-2 and Mcl-1 in human renal cancer cells.

For apoptosis analysis, cells were fixed with 100% ethanol for 2 hours at 4°C, resuspended in 250 μL of 1.12% sodium citrate buffer (pH 8.4) containing RNase (12.5 μg/mL), and incubated for 30 minutes at 37°C. After that, cellular DNA was stained with 250 μL of propidium iodide (50 μg/mL). The stained cells were analyzed by flow cytometer (BD Biosciences). To examine protein expression, cells were lysed in RIPA lysis buffer and centrifuged at 12,000 × at 4°C for 15 minutes. The proteins were separated by SDS-PAGE electrophoresis and transferred to an Immobilon-P membrane (GE Healthcare Life Science, Pittsburgh, PO, USA). The specific membranes were detected using an Immobilon Western Chemiluminescent HRP Substrate (EMD Millipore, Darmstadt, Germany).

Caki cells were treated with the indicated concentrations of SP2509 for 24 hours, harvested and incubated with reaction buffer containing substrate (acetyl-Asp-Glu-Val-Asp p-nitroanilide. 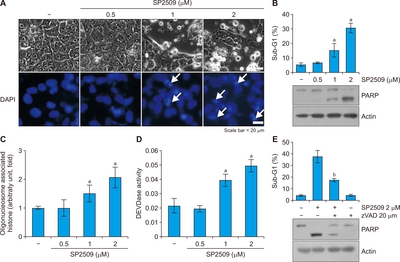 To investigate the molecular mechanism responsible for SP2509-induced apoptosis, we analyzed the expression levels of apoptosis-related proteins. SP2509 induced downregulation of Bcl-2 and Mcl-1, whereas other proteins did not change (Fig. 2A). Next, we checked mRNA levels of Bcl-2 and Mcl-1 in SP2509 treated cells. As shown in Figure 2B, SP2509 inhibited Bcl-2 mRNA expression, whereas the Mcl-1 mRNA level did not change (Fig. 2B). 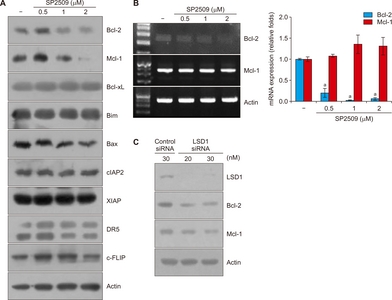 Figure 2. (A) Caki cells were treated with SP2509 (0.5-2 μM) for 24 hours. The protein expression levels of anti-apoptotic (Bcl-2, Mcl-1, and Bcl-xL), pro-apoptotic (Bim and Bax) Bcl-2 family, IAP family (cIAP2 and XIAP), DR5, c-FLIP, and actin were examined by Western blotting. (B) The mRNA levels of Bcl-2, Mcl-1, and actin were determined by reverse transcription PCR and real-time quantitative PCR. (C) Caki cells were transfected with LSD1 siRNA for 24 hours and the protein levels were measured by Western blotting. The graph represents the mean ± SD from independent experiments. a < 0.01 compared with the control.

To confirm the functional importance of the Bcl-2 reduction in SP2509-induced apoptosis, we analyzed apoptosis using overexpression of Bcl-2 stable cell lines. Ectopic expression of Bcl-2 inhibited SP2509-induced enhancement of sub-G1 population and PARP cleavage (Fig. 3A). We found that Bcl-2 mRNA expression was downregulated by SP2509 treatment (Fig. 2B). Therefore, we investigated the transcriptional regulation of Bcl-2, and found that SP2509 decreased Bcl-2 promoter activity (Fig. 3B). These data indicate that SP2509-induced downregulation Bcl-2 protein is modulated by transcriptional regulation.

Figure 3. (A) Vector cells (Caki/Vec) and Bcl-2 overexpressing cells (Caki/Bcl-2) were treated with SP2509 (1-2 μM) for 24 hours, the protein expression and sub-G1 were examined by Western blotting and flow cytometry. (B) Caki cells were transiently transfected with a plasmid harboring the luciferase under the control of the Bcl-2/-751 and Bcl-2/-1281 promoter and then treated with 2 μM SP2509 for 24 hours. The luciferase activity was analyzed. The graphs represent the mean ± SD from independent experiments. a < 0.01 compared with the control in Caki/Vector. b < 0.01 compared with the control.

Next, we examined the involvement of Mcl-1 downregulation in SP2509-induced apoptosis. When we treated Mcl-1-overexpressing cells with SP2509, apoptotic population was less than that of vector transfected cells (Fig. 4A). Because SP2509 did not alter Mcl-1 mRNA expression, we explored the degradation of Mcl-1 through post-translational regulation. Two proteasome inhibitors, MG132 and lactacystin, reversed SP2509-induced Mcl-1 downregulation (Fig. 4B). Moreover, when we examined Mcl-1 protein stability using CHX, an inhibitor of protein biosynthesis, CHX plus SP2509 significantly degraded Mcl-1 protein compared to CHX alone (Fig. 4C). Mcl-1 protein stability is modulated via the ubiquitin-proteasome system. Therefore, we tested the alteration of E3 ligase and deubiquitinase capable of regulating Mcl-1 in SP2509-treated cells. However, SP2509 did not increase E3 ligase β-TrCP and decrease USP9X expression (Fig. 4D). 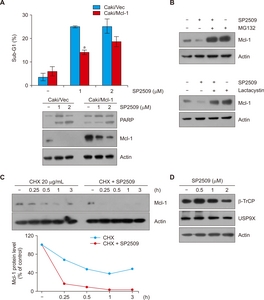 We next examined the effect of SP2509 on apoptosis in other cancer (renal carcinoma and glioma) and normal cells. SP2509 treatment effectively induced apoptosis and downregulation of Bcl-2 and Mcl-1 expression in renal carcinoma ACHN and U87MG glioma cells (Fig. 5A). In contrast, normal cells (MC and TCMK-1) did not induce morphological change and sub-G1 population by SP2509 (Fig. 5B). Therefore, these data suggest that SP2509 may selectively induce apoptosis in cancer cells. 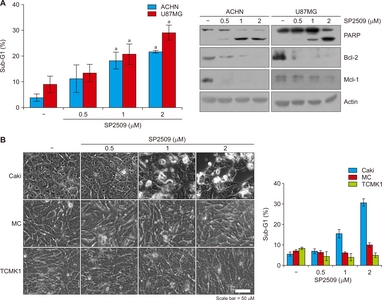 Figure 5. (A) Cancer cells (ACHN and U87MG) and normal cells (mesangial cell [MC] and TCMK1) were treated with SP2509 (0.5-2 μM) for 24 hours. The sub-G1 cell population was examined by flow cytometry and the protein expression was measured by Western blotting. (B) Cell morphology was determined by interference light microscope. The graphs represent the mean ± SD from independent experiments. a < 0.01 compared with control.

Histone methylation and demethylation imbalances are closely related to tumorigenesis and development [19]. SP2509 is known as a LSD1 inhibitor which exhibits anti-cancer effects. However, anti-cancer effect and molecular mechanisms of SP2509 have not been investigated in renal carcinoma cells. Our results reveal that pharmacological inhibition of LSD1 (SP2509) enhances apoptosis in cancer cells but not in normal cells. SP2509 downregulated Bcl-2 expression at the transcription and Mcl-1 expression at the posttranscriptional levels.

To date, many reversible LSD1 inhibitors have been discovered and their activites were tested in cancer cells. Previously, CBB1007 was found to cell viability in pluripotent and ovarian cancer cells [20,21]. In case of 2-PCPA, it induces autophagic flux and cell cycle arrest in human osteosarcoma cells [22]. We first found that knockdown or pharmacologic inhibition of LSD1 downregulates Bcl-2 and Mcl-1 protein expression (Fig. 2A and 2C). SP2509 effectively decreased the protein expression of Bcl-2, and overexpression of Bcl-2 inhibited SP2509-induced cell death (Fig. 2A and 3A). Because SP2509 inhibited Bcl-2 mRNA levels and Bcl-2 promoter activity, suppression of transcription was involved in Bcl-2 downregulation by SP2509 (Fig. 3B). It has been reported that Bcl-2 transcription is regulated by diverse transcription factors, such as p53, NF-κB, c-Myc, and WT1 [23]. p53 is a tumor suppressor and negatively regulates Bcl-2 transcription [24,25]. However, SP2509 did not increase p53 expression (data not shown) in our system, so we rule out the possibility of p53-mediated Bcl-2 regulation. As mentioned above, NF-κB can increase Bcl-2 expression at the transcriptional level, whereas c-Myc decreases Bcl-2 transcription [26,27]. In addition, Wilms’ tumor suppressor gene WT1 positively regulates transcriptional level of Bcl-2 by suppressing promoter activity [28]. Therefore, further studies are required to investigate the molecular mechanism responsible for SP2509-mediated Bcl-2 suppression.

Our results indicate that SP2509-mediated downregulation of Mcl-1 is associated with the ubiquitin-proteasome pathway. Proteasome inhibitors reversed SP2509-mediated Mcl-1 downregulation (Fig. 4B). Ding et al. [29] demonstrated that E3 ligase β-TrCP is involved in Mcl-1 degradation, resulting in tumor suppression and sensitization to anti-cancer drugs. Schwickart et al. [30] have also reported that deubiquitinase USP9X stabilizes Mcl-1 expression. Based on these, we checked the alteration of E3 ligase and deubiquitinase capable of regulating Mcl-1 in SP2509-treated cells. However, SP2509 did not change β-TrCP and USP9X expression (Fig. 4D). Mule/ARF-BP1 and FBXW7 induced Mcl-1 ubiquitination and degradation [31]. In addition, FBXW7 cooperates with β-TrCP which results in the induction of GSK3β-mediated Mcl-1 degradation [32]. Therefore, it’ll be of interest to elucidate involvement of these E3 ligases in SP2509-induced degradation of Mcl-1.

Taken together, our results show that downregulation of Bcl-2 and Mcl-1 play a critical role in SP2509-induced apoptosis in renal carcinoma Caki cells, but not in normal cells.